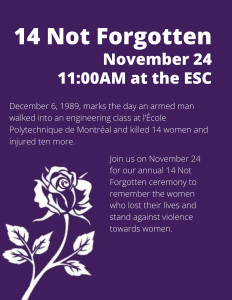 14 Not Forgotten remembers the 14 women who lost their lives in the December 6th massacre. On that day, 31 years ago in 1989, an armed man walked into an engineering class at l’École Polytechnique de Montréal. After forcing the men to leave, he stated that he was “fighting feminism” and began to shoot the women in the class. By the end of the shooting, he had killed 14 women and injured 10 more. In response to this tragedy, Canada established December 6th to serve as a reminder of the gender-based violence that still persists today. This is the National Day of Remembrance and Action on Violence against Women.

UBC Vancouver will be holding a memorial event on November 24th 2021 at 11:00AM PST at the Engineering Student Centre (ESC). The event will include remarks from students, faculty and staff, as well as industry, reflecting on what this event means to them as well as a panel discussion. Following this, there will be a procession to the memorial site, behind the Engineering Design Centre (EDC), where we will lay down flowers.

We invite you all to join us while we remember those who lost their lives and stand up against gender based violence.